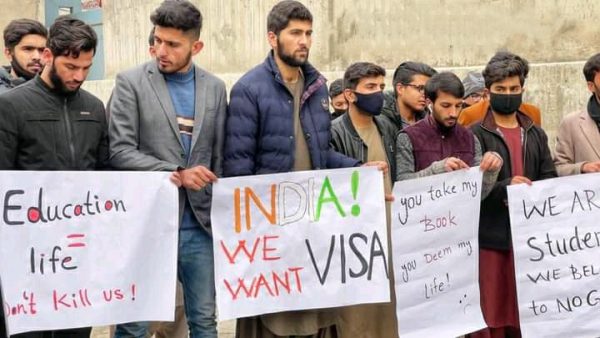 It’s been a little over a year since the Taliban took power in Afghanistan. Afghans around the world are protesting the inaction of the international community to address the many problems they have faced since the Taliban came to power.

Shortly after the Taliban took Kabul, India closed its embassy in the Afghan capital, suspended flights between New Delhi and Kabul and halted bank payments to the Afghan government. While he reopened the Indian embassy in Kabul, only a “technical team” of officials was sent there in June 2022.

For Afghans who studied in India and had made India their home, life had become difficult in recent years. During the COVID-19 pandemic and associated lockdowns, Indian universities have been holding online courses. Afghan students who studied here have returned to their home country.

As Indian universities resume on-campus classes, Afghan students enrolled here are facing a plethora of problems. After the regime change in Kabul in August 2021, many students were unable to return to India.

Get notified with the story of the week and develop stories to watch across Asia-Pacific.

Deedar Saboor, 26, is from Afghanistan’s Panjshir province and has spent more than $4,000 to pursue a master’s degree at a private university in India’s capital, New Delhi. But since the Taliban came to power, her dream of studying in India has been clouded by the problems of regime change in her country. The visas of many students like Saboor are revoked because the Indian government has yet to recognize the Taliban as a legitimate government.

Meena Nezami was studying at the prestigious Delhi University. But without a student visa to return to India, she was unable to complete her master’s degree. She feels her education is halfway incomplete.

“This time when the Taliban regime took over, the first thing they did was shut down the country’s women’s schools and colleges. Many girls looked to neighboring countries for education and India was one of them. It was affordable and good quality education,” says Nezami. But without a visa to go to India, they are in limbo.

Despite knowing that thousands of Afghan students depend on its universities, India has revoked student visas. However, other countries like Turkey, the United States and several European countries accepted Afghan students after the regime change. While India is giving the cold shoulder to Afghans, Pakistan has offered 4,500 fully-funded scholarships to Afghan students in addition to the existing ones.

Piroz Amin, 23, an Afghan student who spent four years in Pune to pursue a master’s degree, says his university remained a secret after March 2022. He is in his final semester but cannot complete his studies until the India is not starting to issue visas to Afghan students again, he says. The decision to suspend visas for Afghans hampers people-to-people contacts and robs students of their prospects.

Students like Meena, Deedar and Piroz say that universities have all their personal data, from addresses to biometrics, and therefore it is these universities that should ask the Indian government to allow their arrival. Trapped under the Taliban and excluded from India, many students who have won scholarships from the Indian Council for Cultural Relations are also losing hope and opportunity.

After the Taliban came to power, attacks targeting Hindus and Sikhs increased the vulnerability of these communities to violence. The Indian government extended their detention by issuing them electronic visas (e-visas). But for Afghan students, there seems to be no sympathy.

According to data provided by the Afghan Embassy in New Delhi, an estimated 13,000 Afghan students are currently enrolled in Indian universities. Nearly 2,000 of them have returned to Afghanistan during the pandemic shutdowns. They were barred from returning to India.

Then there are the Afghans who are in India. Some want to go home, but the ban holds them back.

A senior lecturer at Kabul University, Azad Khan Niaz has completed his master’s degree and is currently enrolled for his doctorate. in Hyderabad. Niaz says governments should keep students out of politics. “It not only affects our studies, but also affects the overall picture of relations between two countries.

Niaz points out that Afghans always used to prefix “India” with the word “friend”. This friendship is no longer obvious, he says.

Students like Khan Mohammad Babai tried to contact the Indian technical team in Kabul. “We called, sent e-mails and even met personally these officials but there is no response from them,” he laments.

The students also met with Taliban acting foreign minister Amir Khan Muttaqi on July 4 to discuss the issue. During this meeting, Muttaqi said that the Taliban government will ask India to grant visas to Afghan students enrolled in Indian educational institutions so that they can return to resume their studies.

Nasir Ahmadi, Ph.D. student at a university in India’s northeast state of Meghalaya is disappointed with how India has forgotten about Afghan students, who contribute to India’s economy when they come here to study .

“Our education is compromised because of politics,” Ahmadi said, pointing out that India has become a favorite destination for Afghans to work and study. With the visa ban, many futures are at stake.