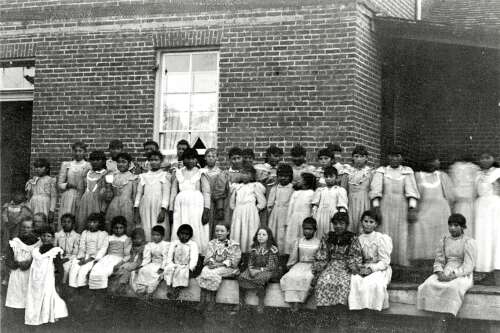 “We just have to keep teaching and talking about it so it never happens again,” said state Rep. Barbara McLachlan.

The Indian boarding school at the Old Fort site in Hesperus operated from 1891 to 1910. It was one of hundreds of sites where the U.S. government forcibly brought native children in an attempt to assimilate them into Anglo-Saxon culture . (Courtesy of Center for Southwestern Studies, Fort Lewis College)

History Colorado researchers have launched a state-mandated review of the former Indian residential school on the grounds of the former Fort Lewis school site west of Durango. The review will include both archival research and physical examinations to uncover the extent of what happened at the boarding school when it operated between 1891 and 1910. And, a year after the discovery of mass graves on sites of similar boarding schools in Canada, the survey in southwestern Colorado will try to determine if there are any burial sites on the property.

In the research team’s first public update on its work on Thursday, Colorado state archaeologist Holly Norton said the team is planning tribal consultations this fall.

Researchers are required to write a final report by June 30, 2023, according to legislation that established the research effort to “promote Coloradans’ understanding of the physical and emotional abuse and deaths that occurred at federal Indian residential schools.” “. But Norton said in their update, “I see this as the start of this effort. I think what happened in those schools is incredibly complex, it affected many, many people, and it’s going to be a long-term effort. I think we are going to have these conversations for many years.

The search will begin with records stored at the Bureau of Indian Affairs in Washington, DC. However, these records will likely give an incomplete picture since the information they contain “almost never features” the voices of children or their parents. (Courtesy of Center for Southwestern Studies, Fort Lewis College)

The state’s research is meant to be a first step in “a roadmap for education and healing,” according to the legislation, though Rep. McLachlan isn’t sure what the next steps might be. They could include repatriating human remains to tribes or allowing tribal blessings to occur at boarding school and burial grounds, among other things.

Ute Mountain Ute President Manuel Heart has ideas for what might come next.

Heart leads one of the nations whose children were forcibly removed and sent to boarding school for assimilation. The healing process should include investments in teaching children languages, cultures and traditions that were taken from their ancestors, he said.

“We want to teach these young children who are currently in school how rich and beautiful it is to be who we are as indigenous people and to continue to have this language,” he told the Colorado Indian Affairs Commission at Thursday’s meeting.

He suggested it might be appropriate for state lawmakers to fund things like the Ute Mountain Ute Kwiyagat Community Academy, which could help “bring back what’s been washed away.”

At a minimum, the roadmap will almost certainly include a plan for greater public education about what happened at the Fort Lewis residential school and other Colorado sites.

The state has launched a task force to survey the Teller Institute site in Grand Junction in 2021. Norton said Thursday that researchers were more advanced at Teller, and this summer they worked there with tribal monitors .

At a minimum, the roadmap will almost certainly include a plan for greater public education about what happened at the Fort Lewis residential school and other Colorado sites. (Courtesy of Center for Southwestern Studies, Fort Lewis College)

A federal government survey of Indian boarding schools across the country reported in May 2022 that the United States operated or supported 408 such institutes in 37 states. The investigation by Interior Secretary Deb Haaland, a member of Laguna Pueblo, confirmed that “the United States has directly targeted Native American, Alaska Native and Hawaiian children as part of a policy of assimilation culture that coincided with Indian territorial dispossession. ”

“We lied to these parents. They were lied to many years ago, and many, many times. And we have to make amends for this lie,” she added.

The Colorado team’s archival research begins with records held at the federal Bureau of Indian Affairs in Washington, DC, Norton said. But these records are incomplete and are “almost never information from the perspective of students or parents”. It would be “incredibly important” to do oral histories, Norton said, but right now “we don’t always know what questions to ask.”

The physical investigation will not be done by excavation; Norton said instead that best practice at other former boarding school sites is to use multiple methods like LIDAR and ground penetrating radar.

Sen. Don Coram, who represents Southwest Colorado in the state Senate and who co-sponsored legislation mandating Colorado history research, said discussions of legislation to address the history of the Colorado with Indian boarding schools lasted for 10 years. He pointed to the lack of urgency, as well as a legacy of mistrust between tribes and federal and state governments, as one of the reasons research has not begun so far.

“We have to learn from history,” Rep. McLachlan said. “It’s a bit like studying the Holocaust. We just have to keep teaching and talking about it so it never happens again.

Carry-on baggage: Airlines are cracking down on baggage weight and size