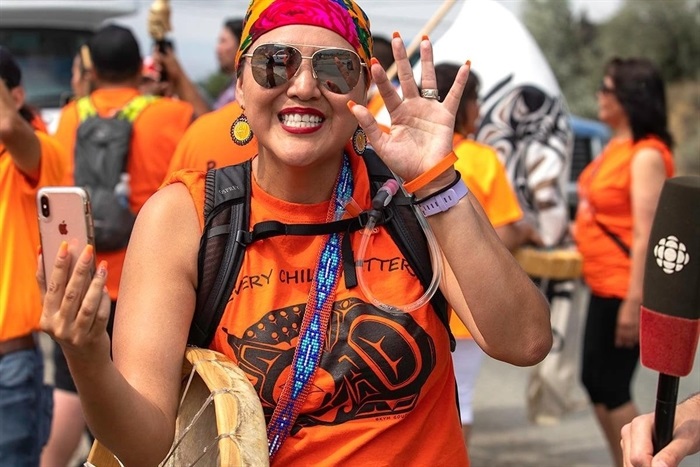 Candice George on the Warriors’ March for the Healing of Nations this summer.

As the country’s first National Truth and Reconciliation Day draws near, some Canadians may be wondering what it will look like, while others have been walking around the ceremonial day as part of the month. a nationwide awareness march.

Candice George, a woman from the Dakelh First Nation of Wetsuwet’en Territory, launched the ReconciliACTION march to raise awareness about abuse at residential schools.

The project challenges each member to keep track of and submit their kilometers driven throughout September with a combined total target of 6,509 km to represent the number of child remains suspected to have been discovered to date. Basic engagement requires walking 1.2 km at least three times a week.

George said she has members participating across the country.

â€œI have a member from Newfoundland and one from Manitoba, as well as many members from the Yukon,â€ she said. The rest are spread across the province. I have two northern school districts participating as well as a private school in Kelowna where teachers keep a count of student kilometers to submit. My smallest participant is two years old. ”

George said the project was inspired by First Nations walkers, the Yukon Warriors, who marched from the Yukon to Kamloops Residential School grounds this summer in honor of the discovery of children’s remains there. .

George joined the Yukon Warriors when they crossed his territory near Burns Lake and marched with them to Kamloops.

â€œIt was a great experience that I wanted to continue,â€ she said. â€œI wanted to inspire Canadians to learn more about Residential Schools and honor the children who fled over the years as well as the survivors today.

George said that an important element behind the project is to get people moving for better physical and mental health.

â€œWhen we move our bodies for at least 150 minutes a week, it will improve our mental health,â€ she said. â€œThe impacts of residential schools caused a lot of trauma. It is important for Aboriginal people to have good mental health and well-being. I wanted to create change and inspire people to keep moving forward.

READ MORE: Indigenous woman from Saskatchewan has been walking to Kamloops for over a month

George said she hopes all indigenous peoples of all ages can experience healthy communities where languages, culture, values â€‹â€‹and traditions are honored and where he is free from trauma, drugs and alcohol.

She said there are several ways to participate on September 30th.

â€œI want to encourage non-Indigenous people to participate to help us raise awareness and hear our story,â€ she said. â€œPeople can write a letter to children and burn it in a tin can, fire is what connects us to our ancestors. Secwepemc’s song of honor is due to be sung at 2:15 pm PST that day. Porter orange to recognize trauma heals for our elders. ”

George said all indigenous peoples have been invited to sing and drummer for the day, to honor the children and to mark the first National Day for Truth and Reconciliation.

You can learn more about the ReconciliACTION walk here.

â€œThe Elders of Secwepemc First Nation tell us that every step we take is a prayer,â€ said George. â€œYou will empathize with the children when you walk. ”

To contact a reporter for this story, email Shannon Ainslie or call 250-819-6089 or email the editor. You can also submit photos, videos, or news tips to the newsroom and enter a monthly raffle.

We appreciate your comments and opinions on our stories, but let’s play well. We will not censor or remove comments unless they contain irrelevant statements or links, unnecessary vulgarity, false facts, spam, or clearly false profiles. If you have any concerns about what you see in the comments, email the editor through the link above.