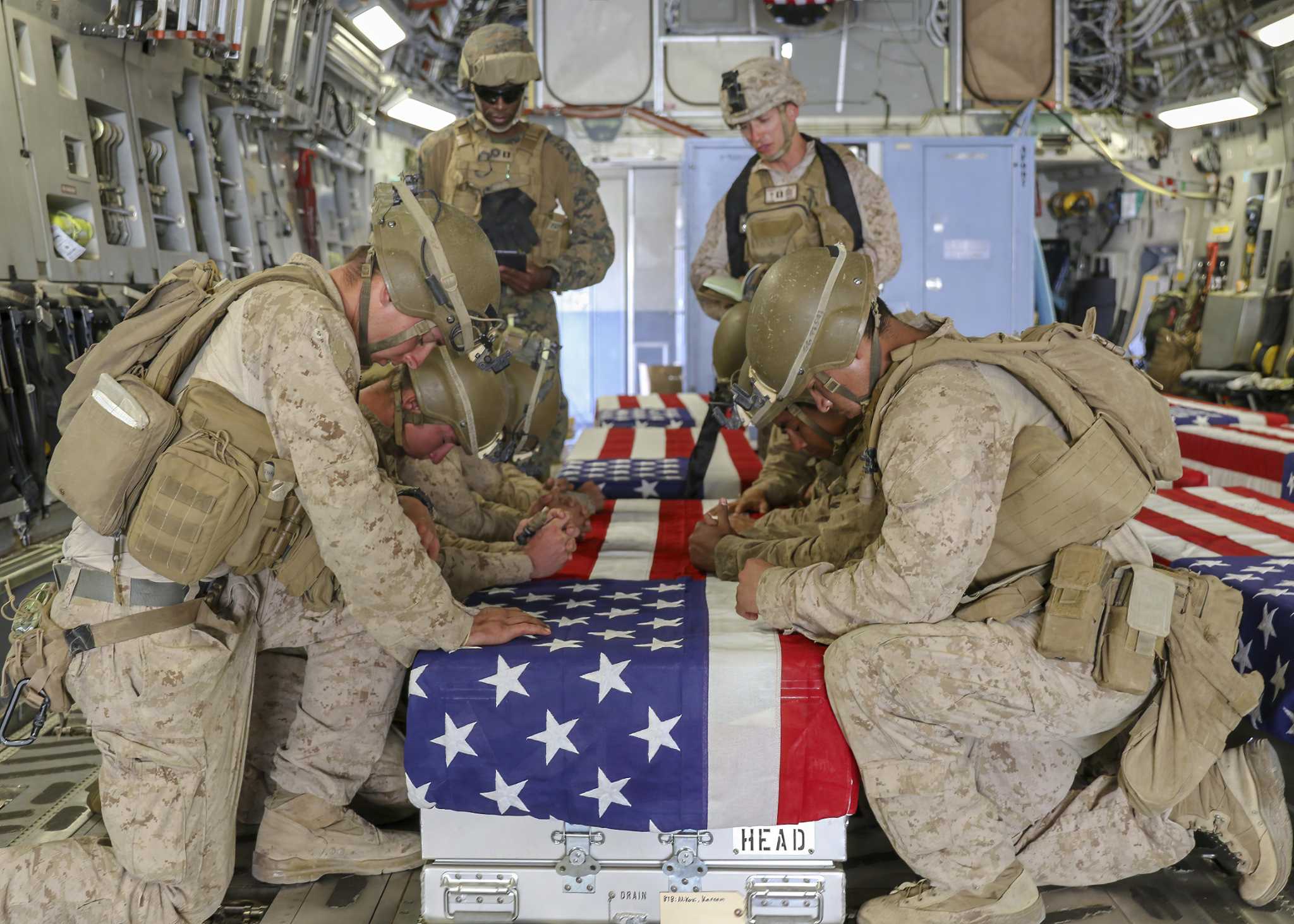 How the DOD shaped Americans’ view of the war in Afghanistan

The Defense Ministry wanted you to see the footage of the last flag-draped coffins leaving Kabul last week – and then you don’t.

On August 27, the military released eight images of the grim procession in honor of the 13 servicemen killed in a suicide bombing near the gate of the Abbey of Hamid Karzai International Airport the day before.

The ramp ceremony was the last chance for those on the ground to honor the dead as they left the war zone.

On the C-17, the Marines kneel and bow their heads in front of the dead. The 13 transfer boxes line the floor of the aircraft.

One photo shows two Marines with their arms around each other. They are looking away from the camera. The hand of a Marine rests on his friend’s helmet.

These eight images sum up the war. Young volunteers thrown into a dead end situation. They are patriots who carry an unimaginable weight in perilous conditions. They joined a long list of people trapped by an escaped foreign policy and an apathetic nation. Despite the rhetoric and chaos, they fought side by side and took care of each other.

Unfortunately, the Department of Defense’s handling of the footage echoes another hallmark of the two-decade-long war – an insidious, pervasive and bureaucratic retention of information the public has seen from the war zone.

War efforts, like any institution, have an innate desire to survive. It is difficult to sustain support when the public sees and understands the true costs. Thus, we see a variety of policies and approaches to shield us from the realities on the ground. More often than not, the government has wrapped these measures in sound reasoning, such as respect for the families of the missing and “operational security”.

The efforts also resulted in a vast overclassification of information, so the audience often got some of the basic facts, but details providing nuance and context were not available.

The end result is little sleight of hand like what happened to the eight photos of Kabul. You see, after posting the photos, the DOD removed them from the Defense Visual Information Distribution Service, or DVIDS, the official repository of military images.

Lisa Lawrence, spokesperson for DOD, acknowledged the deletion of the photos and said they “were posted in error”.

On ExpressNews.com: Lingle: The public was indifferent to a war made abstract

This decision follows an old script that often veils the truth and departs from the military’s declared public affairs doctrine of “maximum disclosure, minimum time.”

More than half a dozen times, on the Bagram flight line, I greeted the flag-covered transfer crates of the dead as their friends transported them on C-17s. At each ceremony, hundreds of people, including senior generals and State Department officials, rose to honor the dead under the Afghan sun. A group played hymns. The chaplains brought comfort. After the jet ramp closed, we all left in silence. And the families of the missing would never have been able to see any because photography was prohibited.


Many of us thought that if we were killed we would want our families to see how our brothers and sisters honored us when we left Afghanistan.

On ExpressNews.com: Lingle: House vets are true to a lie, not their oath

Other coalition countries, including Australia, Canada and New Zealand, had no such restrictions.

It is rare to see such images here. We should be grateful to 1st Marine Lt. Mark Andries, the photographer who captured these photos, and whoever posted them to the world.

Maybe the DOD and the politicians didn’t want these striking photos to end the war. Maybe they preferred the footage of troops helping the Afghans, or that green night-vision snapshot of the last soldier, a general, boarding the last plane.

It’s hard to understand what’s really going on in a war-torn country halfway around the world. The problem is compounded when information is carefully formatted. These photos leave the question: would we have stayed in Afghanistan as long as we did if we had better understood what was going on?

Either way, footage from the Kabul ramp ceremony reminds us of the immeasurable costs of war and serves as a warning against the government veiling the truth.

Covid-19: school bubbles make the most of a unique locking experience

Now that the autopsy report is out, by Olu Adebayo –

On board the Harvey Gamage schooner, students learn about African-American history |…