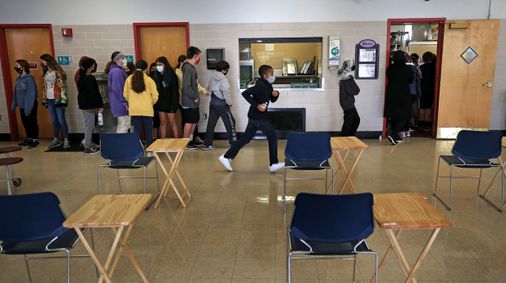 Massachusetts reports 1,879 new cases of coronavirus among public school students and 339 among staff over two-week period

About 920,000 students across the state attend school in person, and about 140,000 staff are inside school buildings. From October 21 to November 3, around 0.2% of students and 0.24% of staff reported positive cases of the coronavirus to their principals.

Weekly reports of coronavirus cases on campus this school year remain higher than at any time last year, as many more students attend school in person; more than double the number of schools have also signed up to participate in state-provided COVID-19 testing services.

About 1,000 schools participated last year, compared to over 2,200 who registered to participate this year. It is not known how many schools are actively participating in testing programs, but 1,866 have so far reported testing data.

The state also released the results of COVID-19 tests at participating schools on Thursday. For the week ending Sunday, 25,926 pooled tests were processed, with a pool positivity rate of 0.82%. In the test-and-stay program, which tests students and staff who were in close contact with people who tested positive for the virus, 13,615 tests were performed and 13,490 tests came back negative.

Massachusetts school districts are required to report positive cases among students and employees to the state, although reports do not indicate how many people were inside school buildings. Local school leaders are encouraged to report any cases among enrolled students or employed staff, whether or not they have attended school since their positive test.

The reported cases among students and staff also do not indicate that school transmission has occurred, or that there was a cluster of cases, which is defined by the public health department of state as two or more confirmed Massachusetts cases with common exposure. From October 3 to 30, there were 59 clusters in Massachusetts public, private, specialty, and boarding schools.

Experts have also repeatedly pointed out that even though many children are not vaccinated, COVID-19 does not cause serious illness for most of the children who contract it. From October 17 to 30, 14 people under the age of 20 in Massachusetts were hospitalized and one person in that age group died.