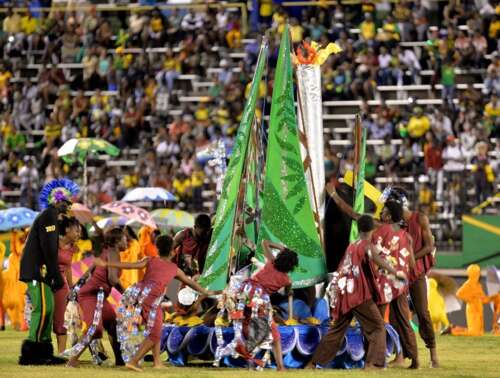 A group performs a cultural piece during the 2016 Grand Gala at the National Stadium.

I learned that courage has no limits. It can be seen as unreasonable, and often it forces us to do what is right rather than what is expedient, even if it means you are on your own on your own. But courage has an obligation to blaze new trails, especially for the generation that is coming behind us, so that when we are gone they can say, “They were ahead of their time.”

As we approach our 60th year of independence from Britain, the People’s National Party (PNP) and the Jamaica Labor Party (JLP) would have had an almost 50-50 split at the helm of the country’s leadership. What will my generation of leaders be known for at the end of this term? What will be our legacy? Will it be based on the number of food parcels we have distributed or the number of roads we have repaired or, even better, the number of bags of fertilizer we have given to farmers?

Jamaica needs a renaissance with the urgent abandonment of the ineffective and tone-deaf approaches that sprinkle our people with mediocrity and confine them to immobile roads with no alternative paths to satisfy their gut desire to prevail. Old-fashioned tales of “change” and “hope” cannot hold the attention of anyone who has to make real-time decisions about how much to pay for enough to eat.

Our people have, in frustration, disconnected from the orange and green flavors of the strains’ political appeal. Instead, they now want real policies that will propel them productively and financially in the long run.

But time flies, much faster today than 10 years ago, and it seemed like yesterday when Jamaica celebrated the 50th anniversary of its independence. That year, I led the direction and execution of the global Jamaica 50 program as Minister of Culture. Fortunately, we successfully implemented it in a short time and with limited resources. Indeed, we have achieved much of what we set out to do so that Jamaicans everywhere can revel in the joy of good presentations and feel our half century as we set the mission for the next.

One of our successes was the novel Jubilee Village and the ‘park and ride’ shuttle service from King’s House to the National Arena, bringing great integration and camaraderie to the celebrations that people remember and talk about fondly. . Unfortunately, we were unable to implement it as a hybrid everyday mode of transport for the public, which could have reduced traffic congestion in Kingston.

Jamaicans are naturally talented. It’s as authentic to our Jamaican identity as a glass of water to quench your thirst. But, like most skills, if you don’t take steps to strengthen them, two things can happen: they either become mundane or they fade over time. Our raw talent alone is not enough to sustain and monetize our cultural impact on the world. We need a structured plan to get us there.

Over the years, successive governments of the PNP and the JLP have treated culture as just a season of one-off activities meant to make our people feel good, but not as a serious industry requiring stimuli to grow significantly our economy and the lives of our people. Both sides have reluctantly acted with conviction and financial dedication to strengthen and develop the creative skills of our people and deepen our cultural infrastructure.

If I had been given the opportunity to do it again, I would have had the courage to impose certain things differently. I would have convinced my government to allocate more resources to build the framework to transform the cultural education framework within our school system, and then I would have fought for a sustained capital budget to finance the operation, the development and strengthening of the cultural value chain of our people. , rather than focusing on spending primarily on celebratory activities. This move would have contributed to the social transformation of our nation by giving our children a cohesive regime of artistic skill training for their future, which, in turn, would strengthen their Jamaican identity and ultimately the viability of the Jamaica brand.

Today, I would have introduced the tools and musical instruments necessary in primary schools to train our children in cultural arts, painting, sculpture, photography, dance and music. Although it was difficult with the financial constraints of the time, we had to build two globally competitive performance and creative arts based high schools – one in Kingston and one in the west – with adjoining boarding schools to rival some of the best in the world. Our last significant investments in cultural performance spaces date back to 1912 and 1958, with The Ward and The Little Theater in the corporate sector alone.

Our 60th Independence Day, Jamaica 60, is two weeks away. We have many proud achievements to celebrate, especially with our musical impact on the world and our highly sought-after culture; more recently, the brilliant performances of our female athletes at the World Championships in Oregon.

However, if we are honest, these achievements have more to do with the individual talents of our employees than with an integrated program to inspire and support them to be the best to shine on the world stage.

Again, culture as a regular budget ministry receives only 5.2% of the total budget, compared to 13.5% for tourism. Remuneration and travel account for the bulk of expenses and few significant changes.

The capital budget for culture is the lowest of any department — a total of $31.8 million or 3.7%. This is extremely short-sighted, because if only we could provide our young singles with an avenue for their creative talents, it would help shape the social transformation we all yearn for.

We have to ask ourselves the question: do people visit Jamaica to see the white sand beaches or do they come to experience our ideas, customs and behaviors?

Others use our Jamaican culture around the world to learn revolutionary music, sport discipline, respect, lifestyle and pride. We are the birthplace of the king of reggae, Bob Marley; sports legend Usain Bolt; and the effervescent GOAT Shelly-Ann Fraser-Pryce. Jamaica’s enviable track and field gold medal record is a direct result of the infrastructure put in place for the training and development of our athletes. The Inter-Secondary Schools Athletic Association (ISSA) Boys and Girls Championships, GC Foster College for Physical Education and Sports and Carifta Games are some of the important platforms we used to identify, train and develop the talents of our athletes for the world stage.

The United Nations has recognized the potential of the creative industries “to help countries in transition diversify their production and exports…” Arts and culture are big business in the United States, accounting for a per capita expenditure of $2,787 usd. Therefore, our proximity gives us a tremendous opportunity to gain a share of this US$920 billion market, which could potentially represent US$306 million for every Jamaican.

It’s time to press reset, be brave, and step away from the temporary missions of what’s popular to do what’s right. If we fail, our cultural imprint on the world can disappear with the tide of another. Therefore, let us build the infrastructure to foster artistic innovation and provide cultural opportunities, benefits and empowerment to all Jamaicans. Our goal should be for every Jamaican to have creative skills. Over to you, Prime Minister.

CT consumers will get refunds from payday loan collection agencies