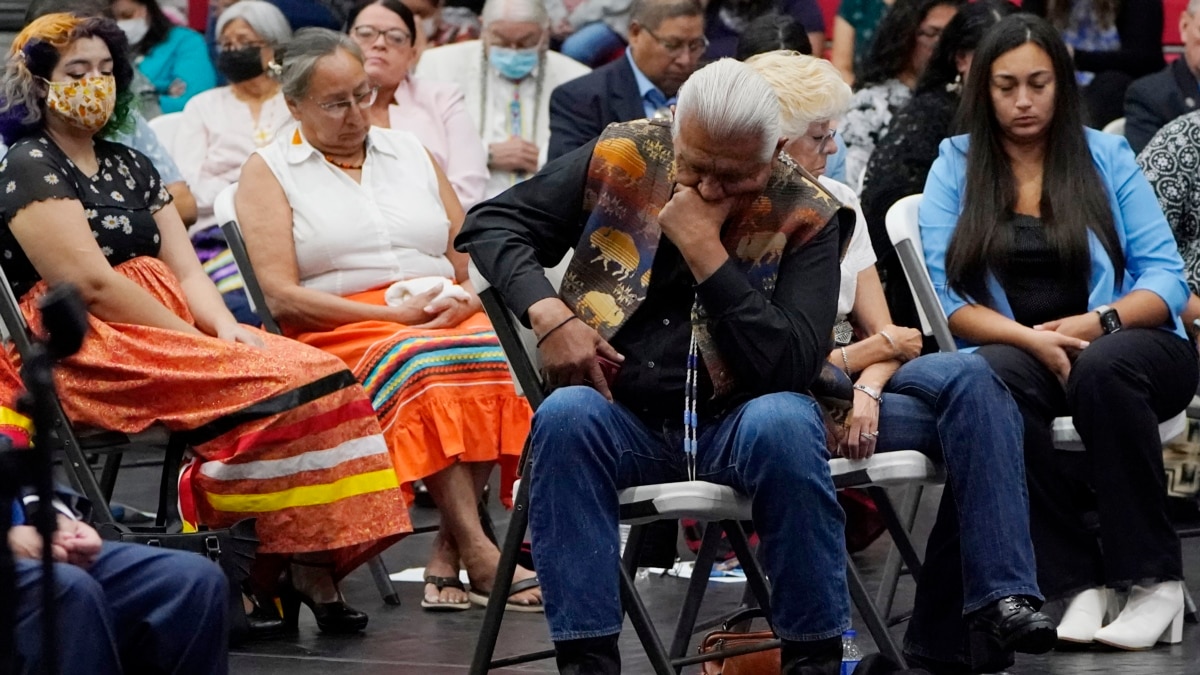 Native American tribal elders who were once students at government-supported Indian boarding schools testified Saturday to the hardships they endured, including beatings, whippings, sexual assaults, forced haircuts and nicknames sore.

They came from different states and different tribes, but they shared a common experience of having attended schools designed to strip indigenous peoples of their cultural identity.

“I still feel that pain,” said Donald Neconie, 84, a former U.S. Marine and a member of the Kiowa tribe who attended Riverside Indian School in Anadarko, about 80 miles southwest of Oklahoma City. “I will never, ever forgive this school for what they did to me.

“Maybe it’s good now. But that was not the case at the time.

As the elders spoke, US Secretary of the Interior Deb Haaland, herself a Laguna Pueblo from New Mexico and the first Native American cabinet secretary in US history, listened quietly. The event at the Riverside Indian School, which still operates today but with a very different mission, was the first stop in a year-long nationwide tour to hear about the painful experiences of Native Americans who were sent to boarding schools. supported by the government.

“Federal Indian boarding school policies have affected every Native American I know,” Haaland said at the start of the event, which drew Native Americans from across the region. “Some are survivors. Some are descendants. But we all carry the trauma in our hearts.

“My ancestors endured the horrors of residential school assimilation policies carried out by the same department I now head. This is the first time in history that a cabinet secretary has come to the table with this shared trauma.

Haaland’s agency recently released a report identifying more than 400 of the schools, which sought to assimilate Indigenous children into white society during a period from the late 18th century to the late 1960s.

Although most closed long ago and none still exist to strip students of their identity, some still operate as schools, albeit with radically different missions that celebrate the cultural origins of their indigenous students. Among them is Riverside, which is one of the oldest.

Riverside, which opened in 1871, currently serves students in grades four through 12, offering specialized academic programs as well as lessons in cultural subjects such as beadwork, shawl making, and an introductory to tribal art, food and games. Currently operated by the Bureau of Indian Education, it has nearly 800 students from more than 75 tribes across the country, and the school’s administration, staff, and faculty are primarily Native American.

It is one of 183 elementary and secondary schools across the country funded by the Indian Bureau of Education that seek to provide education aligned with a tribe’s needs for cultural and economic well-being, according to office website.

But Riverside also has a dark history of abusing the thousands of Native American students who were forced from their homes to attend.

Neconie, who still lives in Anadarko, remembers being beaten if he cried or spoke his native Kiowa language while attending Riverside in the late 1940s and early 1950s.

Brought Plenty, a Sioux from Standing Rock who lives in Dallas, recalled the years she spent in Indian boarding schools in South Dakota, where she was forced to cut her hair and told not to talk his mother tongue. She remembers being forced to whip other girls with wet towels and being punished when she didn’t.

“What they did to us makes you feel so inferior,” she said. “You never get past that. You never forget it.

Until recently, the federal government had been unwilling to examine its role in the troubled history of Indian residential schools. But that has changed because people who know about the trauma that has been inflicted hold high positions in government.

At least 500 children have died in these schools, but that number is expected to rise into the thousands or tens of thousands as more research is conducted.

The Department of the Interior report includes a list of boarding schools in states or territories that operated between 1819 and 1969 that had a housing component and received federal government support.

Oklahoma had the most, 76, followed by Arizona, which had 47, and New Mexico, which had 43. All three states still have large Native American populations.

Former students might be reluctant to recount the painful past and trust a government whose policy was to eradicate the tribes and, later, assimilate them under the veil of education. But some are happy to be able to share their stories for the first time.

Not all memories of those who attended the schools were painful.

Dorothy WhiteHorse, 89, a Kiowa who attended Riverside in the 1940s, said she remembers learning to jitterbug dance in the school gymnasium and learning to speak English for the first time. time. She also recalled the older Kiowa women who served as stay-at-home moms in the dorms, who let her speak her native language and treated her kindly.

“I was helped,” WhiteHorse said. “I’m one of the lucky ones.”

But WhiteHorse also had some disturbing memories, including the time she says three young boys ran away from home and were caught in a snowstorm. She said all three froze to death.

“I think we need a memorial for these boys,” she said.

A plethora of problems | Sports