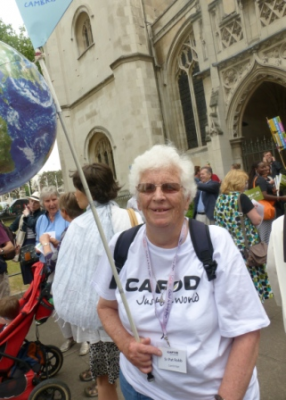 Sr Pat Robb during a climate lobby in 2015

The following is taken from the personal memoirs of Sr Pat by Sr Gemma Simmonds.

Pat was born in 1936 in Penang to a Scottish father and an English mother who had both served in the First World War. His father died in Malaysia when Pat was just two years old, leaving his mother to move to a family farm in Somerset, where little Pat was soon in his element, riding horses and tractors and learning to love all things green and growing.

Her mother was called up for nursing duty during World War II, so Pat was sent to boarding school when she was six. The end of the war brought a new move to Cambridge, where an angry, sulky and rebellious young teenager (Pat’s own description) was hired at Paston House (now St Mary’s School) by the headmistress of the time, Sr. Christopher Angell, who is still alive. and on a mission to Zimbabwe at the age of 106. Sr. Christopher saw Pat as a challenge, and she was not the only person to share this vision of Pat during her lifetime! Paston House was Pat’s eighth school, but she knew right away that a Mary Ward school was different from the “survival of the fittest” culture she had encountered elsewhere.

Giving up on her original ambition of becoming a stable girl with Royston’s racing trainer, she followed her mother and chose nursing at Middlesex Hospital in London. Pat loved nursing and the independent life of London with its smoky cafes, skiffle music and co-ed hockey played with young doctors. There was tension around his interest in Catholicism both with his devoted Anglican mother and with a young farmer boyfriend who asked him to choose between him or becoming a Catholic. But neither her mother nor her boyfriend persuaded her, and Pat was received into the Catholic Church, making her First Communion in the Cambridge Convent Chapel with Mrs Hawke, mother of Sr Anna and Nonie Hawke, who was teaching mathematics at St Mary’s, like her godmother.

Pat became a staff nurse, but other adventures called her, and she sold her Lambretta scooter and boarded a ship bound for Australia, where she found a job in the mountains of New South Wales, covering everything from children’s wards, A&E, maternity and the operating room, dealing with horrific accidents among men digging roads and dams on the mountainside. She went to South Africa in 1960, at a time of appalling violence and racial segregation, often finding herself sitting with black Africans in church, looked down upon by white people.

Deciding to train as a midwife in order to work in a bush mission hospital, she boarded a boat to return home, where she was harassed by two Irish nuns to visit their convent to see ” what it’s like to be a nun”. Pat shuddered at the thought and avoided them for the rest of the trip, but to forget them, and thinking that a teaching order was a greater sacrifice, she said she was entering the sisters of her old school. True to her education, she then felt that she had to keep her word. Mrs Robb was devastated when she broke the news, but the Cambridge community was so kind to her that later she was to say she hadn’t lost a daughter but had gained several. As anyone who knew her would understand, Pat found novitiate life very constraining, so she was thrilled when she was sent to St Mary’s School in Shaftesbury after her vows, heading out into the countryside and wildlife with eagerness. . As Sr Camille, she spent 18 years there as a school nurse, starting the Duke of Edinburgh’s reward scheme, running the Scottish reel club with the help of her prima ballerina, today hui abbess of a Benedictine monastery, and being remembered primarily by former students who have paid tribute to her on Facebook for riding their horses around the hockey pitch, roaring in a tractor and teaching them to play rugger touch, despite the disapproval of many parents.

But her missionary vocation never left her and she returned to London as a midwife, finally landing in Zimbabwe, in a hospital with more than 200 beds, serving a huge outlying rural area. Returning to her Christian name, Pat moved on to the municipal clinic in the desperate poverty of Amaveni township where her interests for justice and peace were awakened by the torture and bullying she witnessed by supporters of Robert Mugabe. A call came from Mozambique, in Chimoio, on the border with Zimbabwe. Built for 25,000 people, Chimoio now housed 250,000, mostly civil war refugees, squatting on the outskirts of town with no sewer or shelter. She focused on maternal and child health, but also dealt with the high number of maimed victims of violence and people dying of HIV/AIDS. In one of many confrontations with authority in her life, she was expelled from Mozambique after speaking out against corruption in the local charity and government sectors, but was invited to travel to Angola with the charity CONCERN.

She flew there to find that the CONCERN office had been bombed during the night and that all documents had been destroyed. Undeterred, she set up nutritional centers with Doctors Without Borders. 100 people a week were dying of starvation and related diseases there in terrible living conditions and she was very busy, with shelling all night and drunken and drugged soldiers guarding the many roadblocks as she and her companions crossed the minefields. When asked if she would do similar work in the camps surrounding Rwanda, she became the camp administrator in Tanzania in 1993, moving to Goma in Congo and Rwanda and then to Burundi at a camp they had to evacuate five times in the six months she was there. Years later, she and I went to see the movie Hotel Rwanda. She was very quiet on the way home, crying later as she recalled the horrors she had witnessed during the genocide.

Pat moved to another war zone in Sierra Leone, organizing the logistics of turning a disused university into housing for hundreds of people, aided by a Muslim cook called Alfred and a Christian guard called Mohammed. His career in the African war zones came to an abrupt end when a bout of cerebral malaria necessitated his repatriation to England. Here she found a volunteer role at the Cardinal Hume Homeless Centre, with one day a week at a legal aid firm involved in human rights for the Traveler community. This was the beginning of her life as a tireless campaigner for justice and peace which is recognized in Professor Anna Rowlands’ recent book on Catholic social teaching which bears a dedication to Pat. He says, “She represented the persistent widow, the virtuous and difficult woman who faithfully believes in a truth beyond mere power and bears witness to it until justice is served. She represents a generation of women, inscribed in the magisterial pages of tradition, but who have led and inspired social renewal.

Conventional community life was not for Pat after her long years under fire and in May 1999 she moved to a flat in Cambridge, working first at Whitemoor high security prison and then as a chaplain at the center of Oakington immigrant detention until its closure in 2010. In old age, she became involved in Justice and Peace work through CAFOD and other NGOs, campaigning on behalf of refugees, including many have become members of his extended family, while caring for his beloved lot.

At the end of his memoir, Pat writes, “God has been VERY good to me.” She, in turn, fought the good fight on behalf of so many who needed a valiant champion. We imagine her well received in Paradise, “Bravo, good and faithful servant – there are horses, motorcycles and gardens galore, just waiting for you to enjoy them…” May she finally rest in peace after his extraordinary life and rise in glory.